Shri Pundalik N.Naik, Renowned Playwright and Poet will be conferred with Smt.Vimala V.Pai Sahitya Puraskar 2012 and Vimala V. Pai Vishwa Konkani Lifetime Award will be conferred on Adv. Uday L. Bhembre, litterateur, lyricist and activist of Konkani movement during a function to be held on December 12, 2012 at Mangalore.

Shri Naik is the President of Goa Konkani Academy.  He was its president for two terms between 2002 and 2008.  He has published more than 20 plays and numerous other genres of literature like novels, poetry, essays.  His radio play ‘Mornakatto’ has won for him not only the All India Radio award but also an International Award. His book of plays ‘Chowrang’ won him the Sahitya Akademi Award in the year 1984. In 2010, he won the lifetime achievement award from Kala Academy, Goa. Shri Naik was chosen for this award by panel of juries headed by Adv. Uday L. Bhembre. The other members were  Shri  Tanaji Halrankar, Fr  Mark Walder,  Shri Melvyn Rodrigues and Shri Gokuldas Prabhu. 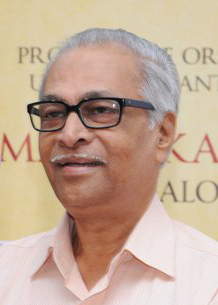