Vishwa Konkani Sardar Basti Vaman Shenoy, the Founder and President of World Konkani Centre, relentlessly strives to fulfill the mandate of 5000 Konkani delegates who resolved for the establishment of the Center at the First World Konkani Convention. He has penned his Vision for taking forward the dream to build an abode for Konkanis all over the world.

Shri R. V. Deshapande, Chairman Emeritus of Konkani Bhas Ani Sanskriti Prathistan, has been a guiding light in all the endeavors spearheaded by World Konkani Centre. A strong community leader Shri Deshapande has been advocating the community first approach through out his professional and social life.

Dr. P. Dayananda Pai, the Chief Patron of World Konkani Centre and Chairman of Konkani Bhas Ani Sanskriti Prathistan. Dr. Pai is a benevolent philanthropist and well known for his gifts to various causes all over the country. The Konkani Community especially has been the chief beneficiary of his philanthropic activities, nevertheless impact of his gifts has been spread across irrespective of caste and religion.

Shri Ramadas Kamath, Chairman of Vishwa Konkani Student Scholarship Fund established under the VISION TVM 2030 KONKANI COMMUNITY of World Konkani Centre. Shri Kamath has been instrumental in spearheading all the programmes and projects under VISION TVM. His leadership has made VKSSF one of the largest Scholarship Programme in India with more than USD 1.25 Millions in disbursals since its inception in 2010.

World Konkani Centre is founded by Konkani Bhas Ani Sanskriti Prathistan to serve as a centre for the preservation and overall development of Konkani language, art and culture involving all the Konkani people the world over.

The First World Konkani Convention held in Mangalore 1995 was indeed a landmark event as for the Konkani speaking people spread across the globe are concerned. It was the mandate received by over 5000 delegates present at the convention for establishing a permanent abode for the preservation and promotion of Konkani language, art, culture, literature and folklore, that paved the way for the setting up of Konkani Bhas and Samskriti Pratistan (Konkani Language and Cultural Foundation) in 1996.

Konkani Bhasha Mandal, Karnataka, the organiser of the convention, founded the Konkani Language and Cultural Foundation with a broader constitution to fulfil this mandate. The then President of the Konkani Bhasha Mandal as well as the Chief Convener of the World Konkani Convention Shri Basti Vaman Shenoy became the President of the Foundation. Eminent Konkani leader and philanthropist Shri K.K. Pai became the Chairman of the Foundation.

Since its inception, the Foundation has been working untiringly to fulfil the aspirations of Konkani speaking people spread across the world in preserving their Languae, unique culture, traditions and way of life for posterity. As a testimony to its untiring efforts today World Konkani Centre stands tall at 3 acres of scenic Konkani Gaon at Shakti Nagar, Mangalore. 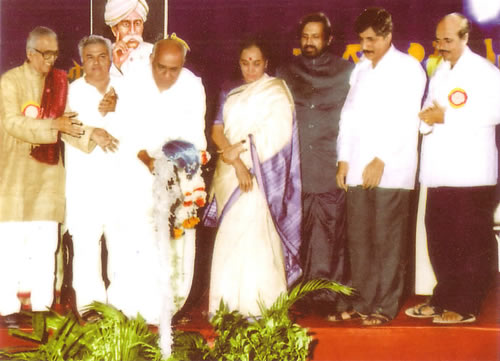 The First World Konkani Convention (WKC) convened in Mangalore 1995 was a landmark event that gave a new impetus in uniting Konkani Diaspora. From a mere suggestion it became a reality with the convention becoming a grand success giving a new dimension to the Konkani movement.  It was a memorable event for all Konkanis as for the first time all Konkani speaking people from all over the world were brought together under one platform demonstrating Konkani brotherhood and bonhomie.

With the recognition of Konkani as an independent language and with its inclusion in the 8th schedule of the constitution Konkani movement had received a fresh impetus. Soon after the suggestion to unite Konkani speaking people sprinkled in different parts and to foster the spirit of unity among Konkanis was taken up by as a challenge by Konkani Bhasha Mandal under the Presidentship of Basti Vaman Shenoy.  An action plan was formed and nearly 60 committees were set up from New Delhi to Kochi to execute the gigantic task.   Six regional committees were also set up in the Middle East, four in the USA and two in UK.

Massive publicity work was undertaken to give wide publicity to the event.  “Bonvdi” a novel method of propaganda was undertaken by a team of artistes who  travelled over 85 places from New Delhi to Kochi, for over a period of 65 days  to create awareness and spread the message about WKC across the country.  The Bovndi gave a glimpse of Konkani culture to Konkani people through cultural events during their tour.

With intense preparations spread over a year and the hard work, dedication and commitment of thousands of Konkanis from Karnataka, Goa, Kerala and Maharashtra toiled untiringly under the able leadership of Basti Vaman Shenoy,  the stage was set for the grand event.   World Konkani Convention was held in Mangalore from December 16 to 22nd with great fanfare and splendor in the presence of thousands of delegates who flocked to the city to participate in a first of its kind gathering of Konkani.    Konkani luminaries like Suresh Kalmadi, Margaret Alva, R V Deshpade and many others who- is-who of Konkani graced the occasion with their valuable presence.  The then Chief Minister of Karnataka H. D. Devegowda inaugurated the WKC and for 7 days Konkanis deliberated on various issues pertaining to Konkani art, literature, music, tradition, culture etc,.  For the first time Mangaloreans were given a peep into the cultural richness of Konkanis.  It was in this convention a resolution was mooted and passed unanimously to establish a World Konkani Centre in Mangalore.