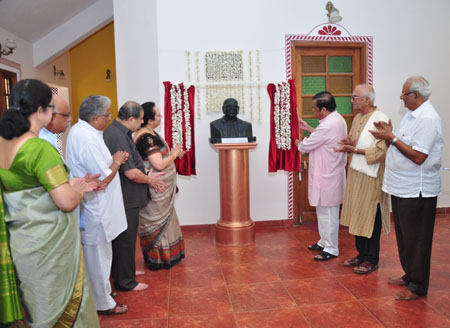 The unveiling ceremony was followed by a formal stage programme where T.Sathish.U.Pai, managing trustee, K. K. Pai Trust, Manipal, was the chief guest while Sandhya S Pai, editor, ‘Taranga’ weekly was the guest of honour.

“The contribution of K K Pai extended to all fields and we the Konkani community should be grateful to him for his tremendous service,” said Dr Pai asking people to imbibe at least a few of his values in their lives.

“Few minutes or hours are not enough to describe such a great personality like late K. K. Pai,” said Sandhya Pai. “He always had concern for others and we have to learn a lot from him,” she added asking people to inculcate some of his values and to pass it on to the younger generation.

On the occasion, the Foundation felicitated and gave a cheque of Rs 75,000 to Kishan Gangolli from Kundapur who will be participating in the world chess championship to be held in Spain in June this year.

Basti Vaman Shenoy, president of the Foundation, welcomed the gathering and briefed on the life of late K.K. Pai. Venkatesh Baliga, editor of Kodial Khaber compered while Pradeep G Pai delivered the vote of thanks.