“In a multi-lingual country like ours giving recognition to the language is very important. It is imperative to understand the value of distinct diversity that exists in our country. One must accept the fact that different languages are important aspects of our qualitative heritage.”said Prof. Rajesh Sachdeva, Director-in-charge, Central Institute of Indian Languages, Mysore. 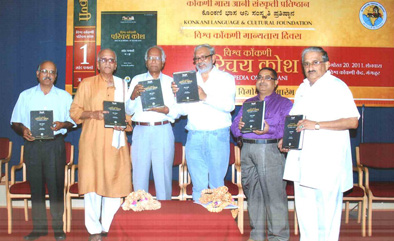 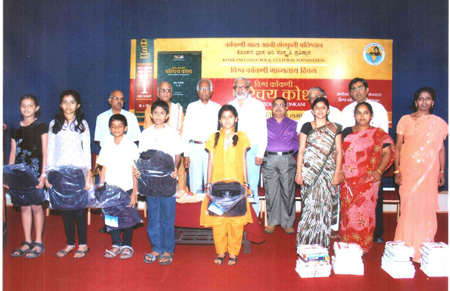 He was addressing the gathering after releasing Vishwa Konkani Parichay Kosh at World Konkani Centre on August 20.  The book was edited by Dr. Tanaji Halarnkar. The release function was organised as part of Konkani Manyata Divas by the Konkani Language and Cultural Foundation.

Prof. Sachdeva reminded the Konkanis with the inclusion of Konkani in the eighth schedule now there was added responsibility to develop the language and safeguard diversity and heritage.

“Language is more important that script. Thus we should make efforts to ensure that script doesnt pose to be a deterrent in development of language. Konkani has found a place among 22 other languages in the eighth schedule because there is lot of literature in the language and conscious efforts are being made in developing it further. Concentrated efforts must be made to teach Konkani in schools,” he further added.

In his acceptance speech Dr Halarnkar stated that bringing out encyclopedia in Konkani has given him as much as joy as bringing his first child and first book.

Dr. Kasturi Mohan Pai distributed books and scholarships to the students who have taken Konkani as their medium of study in school. He stressed on the need to adopt Nagari script so as to bring standardization to Konkani script all over the country.

The welcome address was given by Basti Vaman Shenoy. Subbu Krishna and Raghunath Shet were present in the dais.