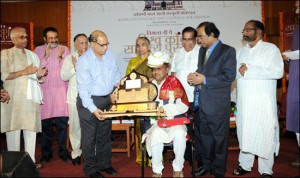 Margao, Dec 20: Noted Konkani novelist Mahabaleshwar Sail was presented Vimala V Pai Vishwa Konkani Sahithya Puraskar for his outstanding Konkani novel “Hawthan” on 18th December, 2010, at a function held in Ravindra Bhavan, Madgaon, Goa. Eminent Oriya writer and poet Prof Prafulla Kumar Mohanty conferred the award to Dr Sail in the presence of Goa Chief Minister Digambar Kamath and other dignitaries.  The Puraskar carries a citation, memento and a cash prize of Rs. one lakh. The award is constituted by World Konkani Centre to promote quality Konkani literature and Mahabaleshwar Sail is the first recipient of this prestigious award.

Presenting the award to Mahabaleshwar Sail, Prof Mohanty stated “literature preserves values for contemplation. The joy of being alive comes from literature.  But sadly today literature is lost in the deluge of information”. Commending the work of Konkani writers such as Mahabaleshwar Sail, Prof Mohanty said these writers have brought respectability and acceptability to Konkani language and taken it to a higher level. “ Literature never dies. It may only change the form. Literature is nothing but stories of life. We are each characters in our own ways to make our life worthwhile. As long as the mystery of life continues mystify us literature will survive”, he added.

T V Mohandas Pai, Director of Infosys Technologies Limited, who established the award in the name of his mother and mentor, Vimala V Pai, spoke on the occasion and said “the award was instituted to retain the identity of Konkani culture and heritage. If we don’t recognize our identify and our cultural heritage we will become a rootless community. This is the initiative of the community to preserve Konkani culture”.

He urged the Goa Chief Minister to adopt the Jewish people as the role model and said “Goa should be made a knowledge state, a centre of education, which will be known globally for its intellectual achievements, scientific discoveries and achievements in the field of art, literature, culture, language, liberal economic and political skills and accomplishments.  We must set up some of the best engineering colleges and institutions in this state”. He also emphasized the need to set up study centres of other countries like Chinese study centre, European study centre, so as to give a world vision to our children and also provide jobs for our youth without hurting the eco system. Goa should become a role model for the rest of the country and the state should have a vision document for the next 25 years, he declared.

Chief Minister of Goa, Digambar Kamath, who was the chief guest, honored Vimala V Pai (in whose name the award is instituted) with a shawl and garland.  Speaking on the occasion Digambar Kamath pointed out that the basic problem of non-availability of land in Goa. Pointing out that land is the root cause of most of the problems in Goa he said “ we can not allow more outsiders to come and dominate Goa. Goa has lot of artisans. There are nearly 5000 families coming from the background of artisan’s occupation. We should try to ensure that their younger generation is attracted towards their father’s occupation and continue the family tradition”.

Dr P Dayananda Pai, Chairman of Konkani Language and Cultural Foundation, who presided over the function while congratulating the people of Goa on the 50th year of independence on December 19, 2010, pointed out that it is a matter of pride that today literature (pen) has become stronger than a sword. “A pen can change the attitude of millions of people over a period of time. A Good thought, good writing and a good talk on the tongue can result in a good book”.  Dayananda Pai, however, emphasized the need of literacy saying “without literacy any other kind of development becomes invalid. To ensure the development of our community we have to ensure no child is deprived of education. Our society is like a big chain and every link in this chain is important. Education is the only weapon through which we can improve the lot of our community”.

Earlier, in his welcome address Basti Vaman Shenoy, President of Konkani Bhas and Sanskriti Prathistan and founder of Vishwa Konkani Kendra, who welcomed the gathering, termed it as a great day for Konkani literature and said Konkani literature is experiencing the tryst with destiny with a Konkani writer receiving the Jnanapith award and many Konkani writers receiving Kendra Sahitya Academy and other prestigious awards. “It is because of the hard work, research and vision of the father of Konkani Movement Shenoi Goembab in the first part of the last century and the work done by later Madhav Manjunath Shanbhogue and others, Konkanis have come together under one umbrella”, he opined.

A five member jury had selected “Hawthan” of Mahabaleshwar Sail from among the entries received for the Vimala Pai Ppuraskar. P Dayananda Pai presented a memento to the members of the Jury Chairman Uday L Bhembre, members of the committee Dr Tanaji Halarnkar, K Gokuldas Prabhu. The other members of the jury Fr Mark Walder and Melvyn Rodrigues, were not present on the occasion.