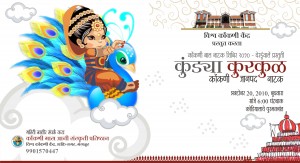 The Drama is directed by well known theatre personality Jagan Pawar and has been produced by Prakash Shenoy U. for World Konkani Centre and is the outcome of Konkani Children’s theatre workshop organized by World Konkani Centre in Mangalore during October last year. Since then the drama has been doing rounds in single performances. Keeping in mind the popularity of the story and the success of initial shows have prompted World Konkani Centre to take out an official tour of this drama. Now the success of the tour has encouraged the orgainsers and they say they are thinking of making this an annual affair.

The Drama is based on the Konkani Folk Tale Kundya Kurkul, which is popular amongst various Konkani Speaking communities throughout the west coast of India. 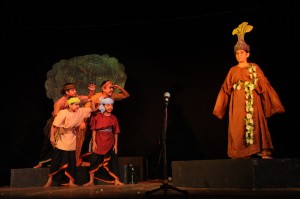 Thieves waiting for prey in Jungle 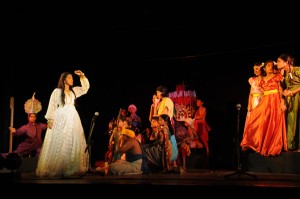 Kurkul searching for her sisters at the Car Festival 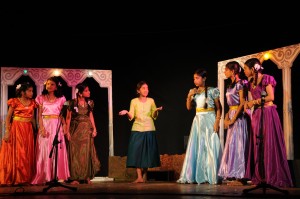 Kurkul tells how she got the golden dot on her forehead 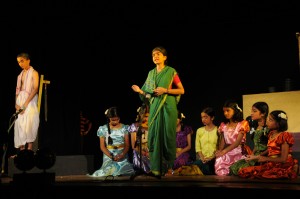 Mother explains the importance of sharing 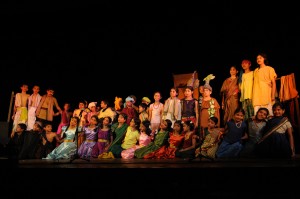 The World Konkani Centre at Konkani Gaon, Shaktinagar here is spreading its wings. The centre moved into its second expansionary phase with the foundation stone laying ceremony of Smt T Vimala and T V Raman Pai Hostel Block on Sunday, an endeavour which will aid the cultural/literary activities that are taking place at the centre. The hostel will meet the boarding and lodging needs of the guests visiting the centre.

The foundation stone for the centre was laid on September 5, 2005, and the centre inaugurated on January 17, 2009. Basti Vaman Shenoy, president of Konkani Language and Cultural Foundation, prime mover behind the World Konkani Centre project hoped that the involvement of likes of T V Mohandas Pai, and Ramdas Kamath of Infosys in their personal capacities would help expedite further growth stages of the centre.

Mohandas Pai has made a personal contribution for the construction of the hostel block as a ‘gurudakshina’ to his mother Vimala Pai and in memory of his father T V Raman Pai. Vimala Pai observed that the foundation stone has been laid on a rare date in history 10-10-2010 at 10:10 am, and wished that the same be inaugurated on 11-11-2011. Pai urged his trusted lieutenant Ramdas Kamath to ensure that this becomes a reality by then.

Pai also urged the trustees of the centre to lay out a road map through which they take up the cause of promoting the language and its culture. Members of the foundation and the centre told TOI that while Pai is known for philanthropy, he is equally a taskmaster and expects the beneficiaries of his acts of philanthropy to stick to deadlines and deliver, a task for which the building committee headed by Pradeep G Pai is geared up for.

P Dayanand Pai, chairman of the foundation and eminent builder himself observed that there is lot of wealth intellectually and materialistically among the Konkani speaking population. They must learn to share the same beneficially for the cause of promoting the language and its culture just as the likes of Mohandas Pai do. The hostel block will give the much-needed impetus to various activities planned at the centre, he opined. 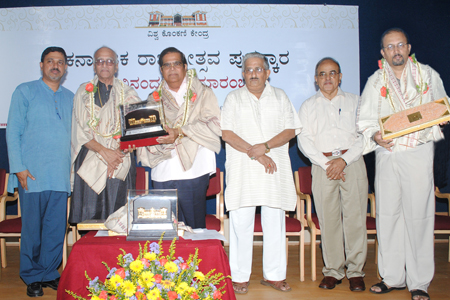 Dr. Pai said that “The award has come with a message to bear more responsibility, I am happy to receive it. Awards or no awards one should continue his good work. After receiving the award one should be humble and not become egoistic.”

“The center’s efforts for the development and preservation of the language is bearing fruits. It is a matter of great honour that three people associated with the WKC have been honoured with the Rajyotsava award.” said Basti Vaman Shenoy.