Delivering the keynote address Ramadas Kamath stated that any language can survive only if the community grows.  “Only if there is growth in the community a language or culture will prosper”, he stated.  Stressing on the importance of scholarship and language and culture, Ramadas Kamath stated that scholarship is required in order to sustain the programmes related to research in order to further the cause of Konkani language and culture and take it to newer heights.

Ramdas Kamath pointed out that the Jewish community which is one of the smallest communities in the world, is in the forefront in every field such as business, science, literature, sports, research, art, music etc, and has emerged as a powerful community. “The secret behind their success is nothing but education.  This community is a role model for all of us to understand, emulate and go forward.  We are nowhere compared to them because we have not gone deep into the knowledge, we have neither shared nor used the knowledge for bettering our cause”, he declared.
To the students Ramdas Kamath pointed out “the two forces that are reshaping our world are globalization and technology.  Increasing geographic and regulatory barriers are falling and we are facing these challenges in a very competitive world.  But we should consider them as opportunities to surge ahead.  Unless we are knowledgeable and strengthen our fundamentals, we will be a total failure”.

He called upon the students to treat every lacuna as an opportunity, have a clear vision built on the fundamentals of sound value systems and sustain the energy within for a longer duration.  He also told them to put community needs ahead of individual needs and lead by example and advised them to save something so as to give back to the society from which they benefit.
P Dayananda Pai, Chairman, Konkani Language and Cultural Foundation, who presided over the function, also emphasized the need of higher education for younger generation of Konkanis.  “Only education can lift the Konkani Community from the economic backwardness facing sizeable sections of the people.  Today wealth is concentrated only 2% of the world’s population. We can improve our status by means of higher education” he stated.  He further added “if 10 Konkani people come together and work together they can wipe out the poverty from every Konkani household.  In that case there will not be any home that will be deprived of education”.   He also pointed out that this may be one of the first instances in the whole of India where such high scholarship amount is given to the students as scholarship.

Vishwa Konkani Sardar Basti Vaman Shenoy, who is the President and founder of World Konkani Centre, recalled the struggle that went into to include Konkani in the eighth schedule of the constitution which became a reality on August 20, 1992.  Stressing on the importance of empowering the youth he said “the youth are our strength and they should take the baton of taking Konkani to greater heights”.   Vaman Shenoy also announced that next year the scholarship scope will be broad based by extending the facility to 2000 Konkani students belonging to different streams of education.

Fr Eric Crasta, who was the guest of honour, termed the distribution of scholarship as an historic event as far as Konkani is concerned.  He also termed the achievement of Chaya Burdekar, who is qualified for Indian Foreign Service by writing one of the subjects in Konkani, as another historic event.  Both these historic incidents are a matter of great pride for all the Konkani speaking people.  He further added that the scholarship awarded to students will go a long way in empowering the youth through education. For the students he said that they have a responsibility as well as an obligation to contribute towards the growth of Konkani Community and to the society.

M Annappa Pai, Hon Secretary, Canara High School Association, Mangalore, equated the scholarship to water harvesting and said this educational harvesting will go a long way in helping students who are really in need of financial help to pursue higher studies.
Chaya Burdekar, the first one to pass Civil Service Exams with Konkani as a subject, was felicitated on the occasion by Dayananda Pai and Mohini Pai. In her acceptance speech Chaya stated that she took Konkani as a subject to answer civil service exams as challenge and called upon more and more students to try for civil service exams by taking Konkani as a subject. MLA Yogesh Bhat congratulated World Konkani Centre and the patrons of the scholarship for their service to the Konkani Community.

In his welcome speech Pradeep G Pai, Secretary of Vishwa Konkani Student scholarship, said it is a unique experience to award help by providing scholarship to students who pursue higher studies. Annappa Kamath and Mohini D Pai were also present on  the dais. Concepta Fernandes and Mahesh Nayak compered the programme in Konkani and English respectively. Venkatesh Baliga, Secretary of World Konkani Centre proposed the vote of thanks. 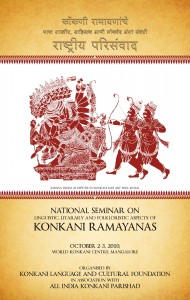 Konkani Language and Cultural Foundation in association with All India Konkani Parishad will organise a Two Day National Seminar on Konkani Ramayanas at World Konkani Centre in Mangalore on 2nd and 3rd October.

Union Minister of Law Dr. M. Veerappa Moily, who has to his credit Ramayana Mahaanveshanam a epic poetry in Kannada has consented to inaugurate the Seminar  on 2nd October 2010 at 10.00 A.M. Adv. Uday Bembhre, an eminent Konkani Scholar will deliver a Keynote address.

Dr. Mattur Krishnamoorthy, Director of Bharatiya Vidya Bhavan and Indologist will be the chief guest at the Valedictory Function on 3rd October 2010 at 4.00 p.m.

In Konkani, Ramayana narration is found in  both  verse and prose. The story  has been told in full or part in folksongs of the Kudubis and  ritualistic forms like Godde Ramayana of Kochi, Sita Suddi and Sita Kalyan of Northern Kerala/South Canara  and the Ramayan Ranmale of Cancon. Some  other texts of Ramayana too are available in written form in Konkani .  Ramayanachyo Kannyo, ascribed to Krishnadas Shama is in 16th century prose.  During 1930s  Late Kamalammal  wrote  the  Raghuramayana in Ovi style verse.  There have also been an  adapted version by  late Narahari Vittal Prabhu of Gokarn  and recently, the translation of  Ramacharitmanas  by  K. Ananta Bhat of Kochi.

The Objectives of the Conference will be to deliberate on  the folkloristic, linguistic  and literary aspects of Ramayanas  in Konkani  in comparative terms, to  identify and document/publish folk form/s of  Ramayana which have not yet been recorded and to publish the seminar papers in a book form for future reference and  further studies.

Konkani academicians and scholars in the field of Linguistics, Literature and folklore from Goa, Karnataka, Maharashtra and Kerala will present their papers in this seminar. There will also be performances by Individuals and groups, experienced in traditional and ritualistic narrations of Ramayana Tales in Konkani.

Watch Videos of the Seminar