A workshop for planning of design and implementing the project activities of developing a draft syllabus and Resource material for Konkani methodology of teaching held at WKC. 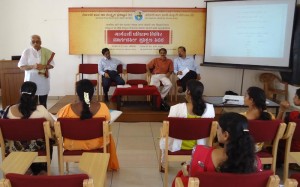 Mangalore, May 29: One day orientation training camp for Konkani Language Teachers being appointed by Konkani Language and Cultural Foundation in the schools of Dakshina Kannada, Uttarakannada and Udupi Districts was held at World Konkani Centre Mangalore on 29th May 2010.

Konkani Language and cultural foundation had invited the applications for the post of Konkani Language Teachers to be appointed in 10 schools under KKLMEIA and Catholic Education Board as a pilot project. The project will be spread across all the schools which have potential for introducing Konkani language as third language from 6th std onwards in next five years. The interview for the teachers held on 15th May and selected 10 teachers who participated in the above training will render their services as Konkani Teachers from June 1st onwards. 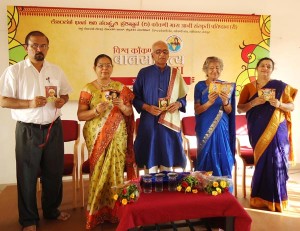 Secretary of the Foundation Shri Venkatesh N. Baliga welcomed the guests and the gathering and introduced the inaugurators as well as the literature series to the gathering. Vishwa Konkani Bala Sahitya Mala, the first of its kind in Konkani Language is the brain child of Shri Basti Vaman Shenoy. The series is being published in Konkani in both Devnagari and Kannada Script and will have more than 100 titles under its plan. Eminent Konkani writers like Smt. Jayashri Shanabhag, Smt. Jayashri Shenoy, Smt. Suchitra Shenoy and Smt. Chandramati Rao have penned these initial 8 Books on sages like Valmiki, Vyasa, Vishwamitra, Parashurama and also on the leaders like Mahatma Gandhi, Ammembal Subbarao Pai, Panje Magesh Rao and Shenoy Goembab.

The series has been published under the grant from Shri Ramadas Kamath U. Senior Vice President, Infosys Technologies Ltd.

Inaugurators Mrs. Pandit and Ms. Mascarenhas stressed upon the need for Children literature in general and in Konkani in particular and commended the efforts of the Foundation in this direction.

President of the foundation Shri Basti Vaman Shenoy chaired the function and explained the activities of the Foundation. Mrs. Chandramati Rao, one of the writers of these books was honoured with a shawl on this occasion. 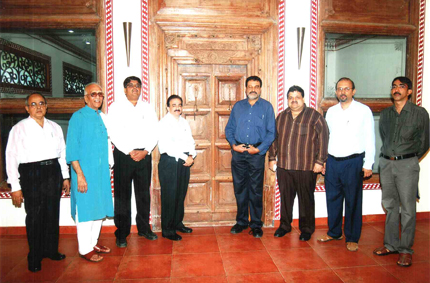 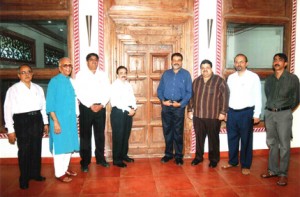 T.V. Mohandas Pai and other Dignitaries

Mangalore November 19, 2009: Shri T.V. Mohandas Pai, Director of Infosys Technologies Ltd. visited World Konkani Centre with his colleague and another distinguished patron of World Konkani Centre Shri Ramadas U. Kamath, Senior Vice President, Infosys on 19th November, 2009. He took keen interest in the activities of the Foundation. Along with other projects declared an award for Rs.1.00 lakh every year to be given to litterateur of Konkani language in the name of his dear mother `Smt. T.Vimala Raman Pai.  He appreciated the `VISION’ and monolith of World Konkani Centre. The Award will be named as T.Vimala Pai Vishwa Konkani Sahitya Puraskar. 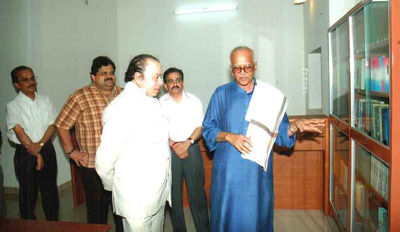 Mangalore September 20, 2009: Shri Eknath Thakur, Chairman Saraswat Co-operative Bank, Mumbai, along with other dignitaries from the Bank’s Management, paid a visit to World Konkani Centre on 20.09.2009. He appreciated the efforts of the foundation and announced a donation of Rs. 20 Lakhs to World Konkani Centre.